I like to think that my origins are somewhere in the Atlantic Ocean before enslavement was dragged onto the shores of Italian-named America. Uprooted from Africa, enslaved, entrapped on a European ship, but not yet arriving in America, I leap from the wooden vessel, headfirst, arms pointed downward to guide my fall, Black body under a black sky filled with stars into the cold black waters of the Atlantic Ocean. I splash into the waves, currents and depths of the ocean. My body crawls through the water with eyes closed, not breathing, submerged as I avoid the hull of the ship. I fear the death fall of  27,000 feet to the floor of the Atlantic. Then my arms engage in butterfly, then right stroke, left stroke, to gasp for air as the strokes of my legs propel me towards any salvation I can muster in avoidance of enslavement, white patriarchy, and the renaming. The renaming will be the loss of identity, the erasure of my African self, the branding with a name of the white male owner of the land or the white male rapist of the clan, or both.  Better here, in the water. I drift now with the waves, trying to stay afloat, as I rub one hand over the glistening, wet coils of my hair and then down my face from forehead to chin to get rid of the sting of salt from eyes, nose, mouth. I watch the ship glide towards the moon with its container full of chained African bodies.

I would like to think that I avoid the fortuitously-named new land. I avoid the bloody European confrontation with the Indigenous of Abya Yala[i] on the land soon to be called America. I avoid the dividing of geographical territory and the imposition of nationhood. I avoid the annihilation that is involved with the European craving for land and the lust for wealth. The building of white patriarchal freedom on the backs of the Indigenous, Africans, women, indentured servants, and the natural environment. The confirmation of marginalisation with the sign of the Christian cross. Thus, the ship sails, and I struggle to survive in the waters between Africa, the dotted lands of the Caribs, and the soon-to-be named continents of the Americas.

In twenty-first-century America, how do I define my origins?

Born in Los Angeles, to a Black family that had migrated from Tennessee and Chicago in search of opportunity in California, I was sheltered in a womb of African-American culture that was enclosed within the confines of a geographical map that included what was then called the Eastside (the Black and Mexican neighbourhoods east of Central Avenue), South Central (at that time, the predominantly-Black neighbourhoods south of Santa Barbara Avenue/Martin Luther King Boulevard) and Fairfax (the Jewish westside).

As a child in Los Angeles, my experiences were formed by warring institutions—family life based on Black Southern traditions which included the Black Baptist Church of my grandmother and the Roman Catholic Church of my mother, a convert. The Baptist and Catholic amens were cut crossways by the cold calculations of the Chicago experience which hung like a cloud over the lives of my grandmother and mother. My grandmother migrated to Chicago from Memphis, Tennessee, and my mother was born there. Chicago was the stretching of the tethers of extended family life almost to their breaking point as my grandmother attempted to earn a living and pay for it while raising two kids. Chicago was the city my grandmother escaped to as she strove to avoid Southern Jim Crow, where she learned how to doubly survive, and where she perfectly measured the right and left sides of her lower limbs in an attempt to draw a perfect line on bare legs—down the back of her knees to her ankles to imitate the back seam of the stockings she couldn’t afford during the Great Depression.

From the ages of five to fifteen, I lived in my grandmother’s Los Angeles homes. From the times when the background music in the home and car was jazz, blues, and rhythm and blues. The background music in the home was punctuated by dancing in the front room as if wearing Michael Jackson’s bell bottoms and adapting our family life to Los Angeles where eight per cent of the population was Black. This reality set up the next battle of warring institutions between my home life and the predominantly Jewish schools my sister and I attended in the neighbourhood my grandmother chose after leaving South Central Los Angeles. When she moved from 39th and Western where the meat market was around the corner with the cuts of meat so desired by my step grandfather, originally from Kentucky. He was the jazz man, the one driving his yellow Pontiac LeMans each Christmas to take us to the home of my great aunt in South Central. My grandmother sat in the front passenger seat, and my sister and I were buckled safely in the back. The car radio streamed Sonny Clark’s Cool Struttin with saxophone, trumpet, and drums opening until Clark’s piano took over, the piano rhythmically hitting the low notes along with the bass, then the drums carrying the rhythm, then the piano leading the rhythm until a trumpet and sax returned on top of the drums now in the background. Each year on this route, my grandfather drove the flat portion of Arlington Avenue, past Adams Boulevard, and sped up just a bit as he reached the approaching hill that had a bump in its decline like a waterslide at an amusement park. “Ahhh!” I screamed. “Whoaa!” my sister screeched. He made sure his car hit the bump of the hill with a hard bop—just enough to make us kids in the backseat scream laughingly over the jazz of Sonny Clark. My grandmother, sitting in the front seat with both hands crossed in her lap, slightly hugged the bottom of her stomach, laughing.

But back to the schools—no ship jumping, no wading in the waters of the Atlantic would forestall the westernisation of the school system. I didn’t see myself in the reading primers in elementary school that stated, “See Jane run.” I wasn’t Jane. I needed an escape route, and in Los Angeles, the waters of the Atlantic could not be my salvation. Like buying a goldfish at a pet store and having the orange fish placed in a clear plastic bag for you to take home, that’s what the waters of the Atlantic had become. Waters I transported from place to place. A few cupfuls.  The purpose of school was to wring the waters out. Everything of my African self had to be erased, extracted.

How to escape the high school English classes where I felt my home dialect wasn’t up to par with the standard English of the textbooks? Spanish classes proved the most accessible route.

“Cómo se dice los nombres de los grupos indígenas de México?” asked Mrs. Gonzalez as she paced across the shiny grey linoleum floor of the classroom in her peach polyester pants with her multi-colored short sleeve shirt hanging below her waist. Her hair was dyed a copper red, accentuating her orange-ish lipstick.

“I got this one,” I thought to myself. And after raising my hand, I proceeded to answer the question by naming the Indigenous groups of Mexico—Aztecs, Olmecs, Mayas. The people who were there before. Before Columbus. The people who pounded bare feet into the ground to make resonate the brown ankle bells held on by beaded straps. Before western time. Before my leap into the Atlantic Ocean. Here was Mexico, an escape route. The Underground Railroad ran north towards Canada in the 1800’s, but there was another that led to Mexico as well. Away from the frigid waters of California’s Pacific, Mexico led me to the warm waters of the Gulf of Mexico and to the Caribbean Ocean. The Dominican Republic, Haiti, the Black population of Colombia, cumbia rhythms and dance, the Garifunas of Central America and of course, Brazil with the largest enslaved population in the Americas.  We were approximately 400,000 when we disembarked on the shores of the United States during the Trans-Atlantic Slave Trade. Between 1530–1888, Brazil had uprooted 4 million Black enslaved people.

Like the Atlantic, the US-Mexico border imposes a social and cultural borderline that can be metaphorically traversed. Chicano/Mexican-American writers—such as Gina Valdés in her poem Where You From?—have elaborated on the physical and metaphorical reality of the border in myriad ways. Valdés begins:

“Soy de aquí
y soy de allá
from here
and from there
born in L.A…”

Equipped with a metaphorical border, I was able to view U.S. society differently. I was from here, but I wasn’t. I was from here and from somewhere else. Distance was constantly calling me, beckoning. Also experts at metaphorical double consciousness were Puerto Rican writers such as Victor Hernández Cruz who states in his poem, Los New Yorks:

Then mix the standard Western education, the literary and lived double consciousness with the social double consciousness of W.E.B. Du Bois and my own independent readings of Langston Hughes, Richard Wright, Gwendolyn Brooks, Audre Lorde, Sonia Sanchez, Nikki Giovanni, Malcolm X, and Angela Davis, and the result was that eventually, still flailing my arms, moving my legs in strokes that beat faster and faster, trying to stay afloat, the me of myself rose from the waters of the Atlantic gasping for air.

Not feeling at home has caused me to peel off the layers of self. As if the salt and sea lice of the Atlantic have eaten at my skin. I am from Los Angeles, but this is territory of the Tongva Natives. At its historical core, not U.S. land, not Spanish land, not Mexican land. The reality is there beneath the surface, if we dare look. I gaze at the mountains and valleys of Southern California, and I imagine the land before the conquest, before industrialization and mechanisation. It is always there, below the paved streets, in the earth.

Not just reading, but even more so, life experiences have forced me to peel away the dried patches and useless layers of myself. In a perfect union of theory and praxis, life has done its number on me, and the result has been an authenticity that might earn a wink from both the Gramscians and the French existentialists. Not just the reading, but the struggle of acquiring an education in predominantly white institutions, the limitless labour involved in my eventually teaching middle school, then high school, marriage, single motherhood, political engagement.  All of it, accompanied by critical thought, will strip you down to who you really are. And the longing, the limitless longing to return home. The search for a home that has preoccupied me since my days in high school. The acute alienation.

Thus, the water. The Atlantic. Where I jumped ship off the coasts of North America and where the currents surge towards the Caribbean, Central and South America. Not flailing. Floating now.  Then, with my arms, right stroke, left stroke, legs propelling me in steady movement towards Africa.

[i] The Indigenous name, from the Cuna Natives of Panama, for Latin America

[iii] A Cuban rumba rhythm in music and dance

Photo by Christopher Campbell on Unsplash 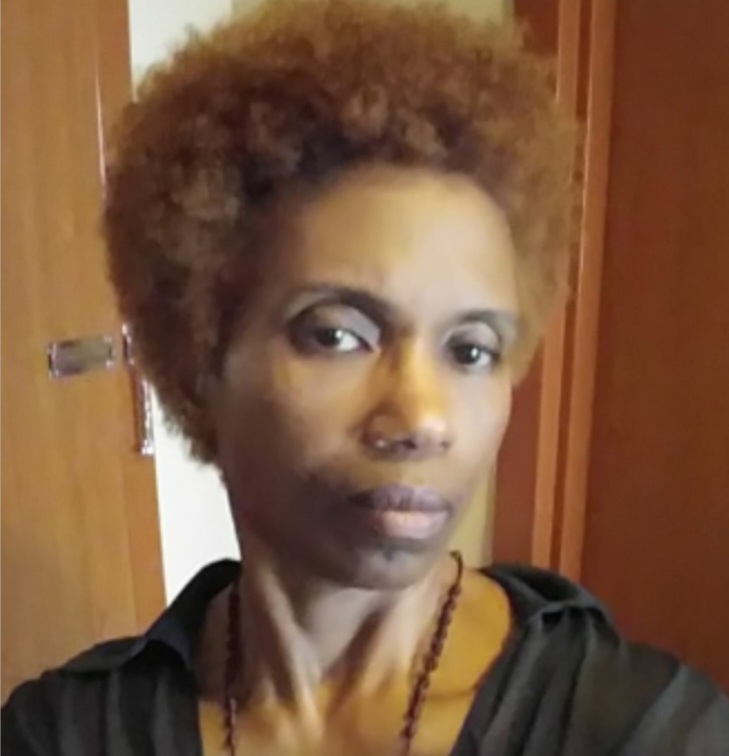 Born in Los Angeles, Audrey Shipp is an essayist and sometime poet whose most recent writing has been published in Sapphire Hues, Another Chicago Magazine, Pure Slush, Litro Magazine USA, A Gathering Together, and Linden Avenue Literary Journal. Her bilingual poetry appeared in the Americas Review (Arte-Publico Press), which was formerly published by the University of Houston. She holds both a BA in English and M.Ed from UCLA and an MA in English from California State University, Los Angeles. She teaches English and ESL at a public high school in Los Angeles.