What could be burning on a Wednesday afternoon?

Akure cannot reject me
(being the land of my birth and birthers
being the gate through which I was thrust into this world).
But this town—Ile-Ife,
its child beggars to whom I have never been much help,
its bikemen who I continue to spite by trekking,
and its poets whom I have not acknowledged—has.

Is the conductor’s call for a final passenger to Akure,
then, a beckoning to me?
Is it my cue to run miles
into the waiting embrace of my mother?

A voice in my head disagrees—
caterpillars eventually grow wings, Moyo,
and fly away to their eventual lives
and deaths.

I, who was once a child,
am still a child,
except for the beard
and the moustache
which, anyway, are not implements of flight.

I cross the road,
the final passenger crosses in the opposite direction.
I begin to descend the slope leading home.

I see smoke rising in the distance.
What could be burning on a Wednesday afternoon?
What comes to mind is refuse
which is called that because it is what,
like me,
the people have refused.

I remember the Saturday before;
the boys of Mayfair were smoking in front of my room
when Gangin’ suddenly proclaimed:

Five minutes later,
Limo caught up with the thought:

“na so! na so!
na why him taay gaan for there
na why him eye red when he finally show.”

I imagine he puffed, passed and nodded
like a knowing prophet.
But can this smoke,
rising in the distance,
be coming from their lips?

is this the handiwork of the Pentecostals
who have been praying for fire,
who have petitioned you, the God of Love,
for the carnage of their imagined enemies.

I know for some it is a metaphorical fire,
but others are striking a match,
gathering bundles of love—
and setting them alight.

Won’t you whisper to the man on the pulpit
that old things have passed away?

Won’t you send the rain?

Poet:
Wiwa,
shouldn’t you be deep in eternal sleep?
Why are you making other pedestrians think me crazy?

Wiwa:
Why else do the dead return,
if not to question the living
about the struggles they leave behind.
And don’t ask if I can take it,
wailing ghosts are a hoax.

Poet:
Alright.
’98, a fire burned in Jesse, Delta,
bad maintenance, cigarettes, oil… a fire burned in Jesse,
300 bodies burnt beyond birthmarks and lovemarks, recognition.
’09, Shell spilled 14,000 tonnes of oil into the creeks.
Do you think Kawaa Bari could have survived this ill-libation?
Or is Shell the corporate Nietzsche,
pronouncing river goddesses dead across the globe?
’16—

It was the Easter Celebration of ’17,
at the New Bukateria,
where I, Vladimir, and my green bottle, Estragon,
sat waiting for Dunni.
There was music, too, of course.
Wizkid and Davido from the pores of bored speakers.
And, as you might guess, there was smoke.
Waiting, we considered revisions to the smoke-fire cliché and held that
“for every smoke there’s something burning”.
In that sense,
the smoke was merely a shroud to cover the crime scene unfolding:

1. knives sharpening each other in multiple corners
2. cows and goats (already dead) being grilled in a furnace
3. catfish, swimming, before the crooked finger points.

The smoke was merely incense
to cover the smell of death in the holy air.
And I felt deeply the fate of the animals,
dying to keep a party alive.
These ones that cannot rise on the third day.

Every year,
we remember Golgotha.
We don’t forget history’s list
of those who have been put to the knife.
Of those worked to death by Buchenwald’s butchers,
those gassed by the switches turned on at Auschwitz,
those encircled and trampled by tanks at Tiananmen square.

The memory of the holocaust
is alive in the words of Kertész and Wiesel,
of Frankl and Frank.
The image of the lone man,
daring tanks to run him over,
will also last forever.

After the abrupt end to the #OccupyNigeria protests of 2012

The world stood silent that day
we decided not to march,
for fear of jackboots,
for fear of AK-47 rifles
when Omar1 and Esele2
decided they were mortal.

Someday, an immortal must die for a free Nigeria.

Should I, then, take the keg of gasoline by its handle
and like Bouazizi3
set myself on fire?
How will the newspapers frame it?

the self-immolation of a young poet
or
young man, 24, sets self on fire?

Hundreds, dancing and singing One Nigeria,
rounded up.
Nigerian troops fish out the boys and men,
and give the order—
“Fire!”
A kind of fire from which blood, not smoke, issues.

Let us, like Holmes, exclude the impossible
and inch closer to the truth.

It can’t possibly be Sango,
god of thunder and fire,
whose ose4 we have traded for the cross.
Nor can it be fireflies,
those beauties of night, who, since Frost, have been abandoned by poets.
Hearts on fire are also merely metaphors,
not real enough to produce smoke.

What, then, could be burning on this, otherwise, beautiful Wednesday afternoon?

1,2 – Labour leaders for the NLC (Nigeria Labour Congress) and the TUC (Trade Union Congress) respectively during the #OccupyNigeria protests of 2012.

3 – Mohamed Bouazizi, whose self-immolation was one of the sparks for the Arab Spring

* – An earlier version of this strophe was published in the Rising Phoenix review in 2016. 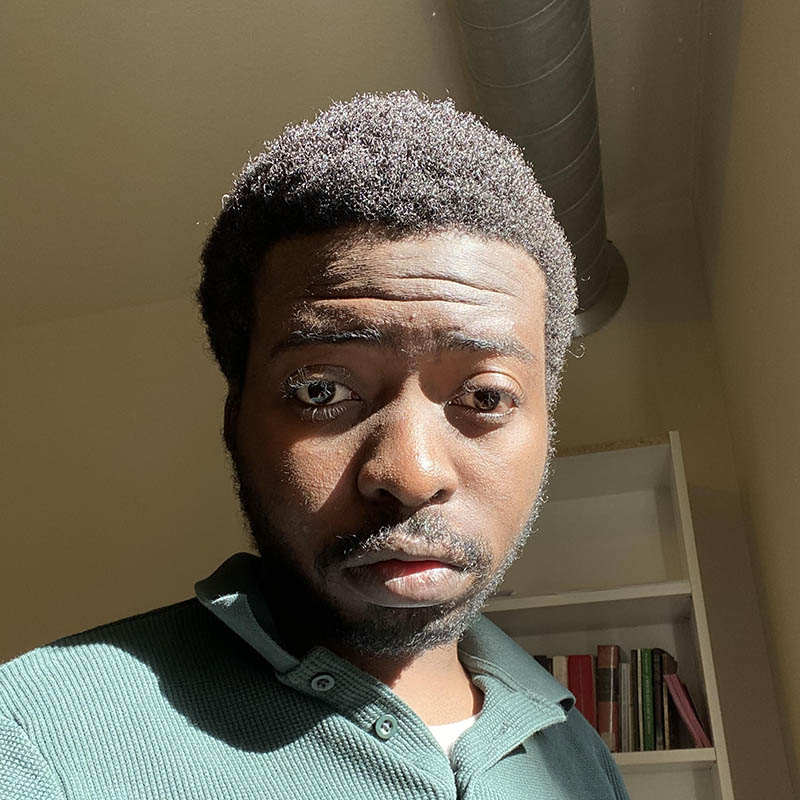 Moyosore Orimoloye is a poet from Akure, Nigeria. His chapbook of poems “Love is a Plot Device” was published by SankofaMag in 2019.