The Model of the Rumba Woman

No one really warns you about the Rumba Woman. And maybe nobody even thinks that they have to, figuring that some things are so obvious. Surely, you are not so daft: no one has to tell you that such a woman is not the kind you are supposed to look up to. No one has to tell you that being the woman who spends all day hanging around other women’s husbands as they hang around the Wines & Spirits in the quarter is not something you should aspire to become. And yet, you do look up to her, in spite of yourself. You do it so quietly and so secretly that you do not come to know it until later, when, needing a model for the writer’s life on which you are setting out, you remember the Rumba Women of your childhood.

You recall that whenever they’d speak about a Rumba Woman, the people in the quarter, they’d refer to her as the cigarette woman, or the drunk woman, or the philandering woman, identifying her through these most manly of vices. But it was the smoking that got to most people. In those days, it was mostly men who smoked in public. Sportsman, SM, Safari, Rooster. By contrast, the women, furtive to the bone, both by necessity and design, would satisfy their urges by inserting bits of tobacco into their nose and sneezing. And then laughing. But there they were, the Rumba Women, the brazen exceptions that proved the rules, dangling actual cigarettes from the tips of their lips. And they did this not in the shadows, not while hiding behind the houses, not even in the small spaces that were left between the Swahili houses in the quarter, but right there in the open, sitting open-legged on the stoops of the quarter’s houses, as if daring anyone to challenge them. But no one ever had the courage to challenge them. And perhaps this was the first lesson that a Rumba Woman taught: there was a kind of audacity which, if inhabited well enough, would not, could not,  be challenged.

As a child, it is strange what you feel when you see a Rumba Woman walking around in the quarter: you admire her and pity her in equal measure. Such a woman is bound always to look dishevelled, with that faraway look on her face, the kind that says two things are always being weighed against each other in the mind. She is always plotting. Her hair looks like it really needs someone to pay it some attention. Maybe a comb. Fingers passed through it. Or just water. She looks like she has not seen water in days. She looks both in control of herself, and yet, out of control. You see her and immediately feel that she has fallen hard against life. There’s the sinewy frame, no fat, all tough muscles and bones. There’s the  old nail varnish on her toenails. There’s the graceless graze in her voice, as if someone has passed a razor along her vocal cords, making it sound like she is always on the verge of the smoker’s cough.

You remember that seeing this woman would stir something in you, prompting the feeling of an affinity that you could not explain. It was as if you belonged to the same tribe. As if you were made out of the same material, same stock. Still, adult as you are now, you struggle to wrap your mind around Rumba Women. There’s something about them that escapes you. Which is to say: there’s something about you that escapes you. So you do what you typically do to things you don’t understand: you write.

You are working on your first book. It is an elusive little thing—not a collection of short stories, not a novella, not a novel. You christen it liminal. You are self-congratulatory about its supposed liminality, feeling as if you have done something clever with the thing. You name the first Rumba Woman you write about Bi Kizee. The name is a nod to Bi Kidude, that most illustrious of Zanzibari Taarab artists.

From the attic of your mind comes the memory of a Rumba Woman. Memory is a strange thing: of all the people you think you’d have forgotten, you hadn’t imagined that it would be her. You decide to model your character, Bi Kizee, on this Rumba Woman.

You remember that this Rumba Woman, your favorite of them all, was different. First, she was old—older than the Rumba Women you were used to seeing. She would wrap her scarf around her shoulders and make her way slowly through the streets of the quarter, at once sticking out and blending in.  She had caramel skin. Hers was not so much a walk as a sashay. She had a haughtiness that settled at the tip of her nose, seeming always to be on the verge of a sneer. She was the complete antithesis of what you expected of a proper old woman. She was the epitome of the Rumba Woman: She smoked. She cursed. Her laugh started in her belly, startled you, and then swept you away in it. It was said that she had come to the quarter to die. One look at her was enough to tell you that she had pulled the very marrow out of the bone of her life, that she had been everywhere, seen everything. And she had black lips, always the first giveaway.

Now, you remember how you’d loved her as a child, adored her, lived for the moments when she would walk up to you as you and your friends played on the stoop of your parents’ house and hand you money to fetch something from the shop for her. What joy. You would run to the shop, run back, and find her seated on the stoop, already on her third story, a little crowd of women surrounding her. Her audience was always women. She was the sort of person who only had to say good morning to a person to hold her hostage for hours. She wanted to hear it all: what someone had eaten for breakfast, what she was planning to cook for lunch, how the husband and children were doing, how the previous year’s Ramadan had been, and from which shop in Marikiti someone had bought her dress. And you, little girl that you were, it was enough to hear that drawl of her voice—frequently interrupted by that cough that just never went away—going on and on and on, and setting your mind ablaze.

When you finally commit her to the page, this older Rumba Woman, she becomes something different. She falls right into the world you are building. Like that woman in that most famous of Rumi’s poems, Bi Kizee is a woman who loves to wander and loves to leave. In the book you are writing, she comes into the quarter as if out of nowhere. And Tatu, the narrator of your book, says this about her:

Bi Kizee is a storyteller. And every Thursday evening, after the mwadhini has sent out the call for prayer, a throng of little girls surround her and listen to her tales of magic. She has dreadlocks, long, and they make the women of the quarter scared of her. They whisper: she is half-sea and half-woman. They forbid their children from going to her storytelling sessions. But Thursday after Thursday, the children return to her, enraptured by the story that never ends, risking the anger of their mothers. The children, just like the little girl you used to be, cannot resist the wonderful magic of this Rumba Woman. In the book you are writing, Tatu narrates:

It is inevitable: as you write about Bi Kizee, you start to fall in love with her. And in writing about her, you are also writing about yourself, about who you want to be. Bi Kizee is something like yourself: she has the spirit of Scheherazade and the spirit of a Rumba Woman. Her territory is East Africa and she spends her years wandering it on foot, only settling down in certain places to tell of the places she has been and the things she has seen.

But as you write about Bi Kizee, prodding into her character, you realize that there is a certain unhappiness about her, which is the unhappiness that hovered about the Rumba Women of your childhood. Perhaps it is regret at the sister-lives she has abandoned, the roads not taken. She, too, you imagine, once longed to put down roots somewhere. She, too, must have longed to call one or two people home. And because it is the condition of the heart to long for a base, a center, a place from which to set out, she always kept returning to one person, one place, one idea. This was her one weakness. It could be a married man she simply couldn’t let go of, or an old love who probably rejected her by blowing hot and cold, hating himself for even wanting her in the first place. Hers was the sad plight of Toni Morrison’s Sula, a woman who is never loved the whole way through, a woman who, perhaps, stirs a man’s mind but not his body. This was the private tragedy of the Rumba Women.

And then there is the criticism with which the Rumba Woman has to contend. She has to learn to handle those who she offends by simply existing, by living her life as she has chosen. In your book, Bi Kizee’s unconventional way of living earns her the scorn of the other women in the quarter.

At the heart of the derision that is aimed at the Rumba Woman by the other women in the quarter is a frustrating contradiction. The women who do not approve of her feel superior to her. And yet, at the same time, they wish they could muster the audacity Bi Kizee has, the audacity shared by all Rumba Women, which is the audacity to be oneself. 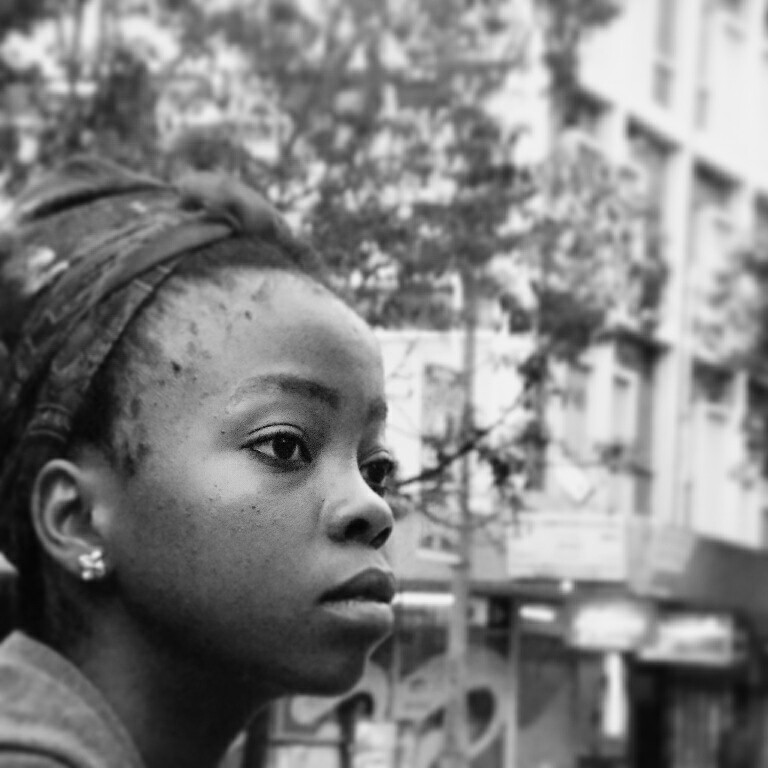 Idza Luhumyo has training in screenwriting and a background in law. Overall, her artistic practice interrogates the intersections between art, law, and power. She is building a body of work which attempts to capture a specific Kenyan Coastal vernacular.