The Milkmaid: “This is the Story of Our Lives”

The Milkmaid is a movie that follows a series of remembering, narrated by Aisha, a young woman navigating insurgency. She rarely maintains eye contact with other characters, often looking away—out of fear, out of grief, disbelief, disdain. Her eyes are full of innocence and suffering and longing, and through her, we see everything.

“Another night, another nightmare.” Aisha’s narrator voice says, as she watches her friend, Hauwa wake from a nightmare and struggles to go back to sleep. “This is the story of our lives.”

There’s a group of people at a wedding, dancing and making merry. Aisha’s sister Zainab is happy to marry the man she loves. A colourful day indeed: they are dressed in bright, beautiful outfits; a pink veil falls over Zainab’s face and there’s Hauwa singing as though the moment is all that matters. Their joy soon turns to despair when they get ambushed by a group of men. In an instant, the town falls into a despondent haze. Many are on the ground, dead or dying. The few ones alive are scrambling for safety, for more life. Others are abducted. Families divided. The great interruption of their lives. Nothing is the same after. Their tomorrows become unpredictable, filled with horrors and more interruptions, travelling to and from memories, living and reliving trauma. Finding “wherever death cannot come” becomes their greatest aspiration.

Aisha and Zainab are young milkmaids in a town in Northeastern Nigeria. With both characters brilliantly embodied by Anthonietta Kalunta and Maryam Booth respectively, The Milkmaid tells a story of grief, separation, and resilience. It reveals several accounts of how the Boko Haram insurgency has affected women, girls and families.

Since 2009, Boko Haram has carried out kidnappings, murders and large-scale acts of violence in Northeast Nigeria. Formed in 2002 in Maiduguri by Mohammed Yusuf, the initial name was Jamāʿat Ahl al-Sunnah li-l-Daʿawah wa al-Jihād (Association of the People of the Sunnah for Preaching and Jihad). The name Boko Haram (Western education is forbidden) was later adopted, with its members subjecting innocent people to horrific atrocities. The government estimates that more than 30,000 people have died since 2009, the year Abubakar Shekau assumed leadership of the group.

We often talk about the need to shed light on underreported stories. News platforms, storytelling panelists, grants administrators are always asking, looking out for stories that need more attention. But is it possible for a story to be over-reported? What are our expectations when humans, with hopes and eyes that pray to see the next sunrise, are reduced to numbers? At what point do headlines of abductions and beheadings converge in our brains, a hazy collage, leaving us inured?

In The Milkmaid, we not only watch, we feel. The film tells a story Nigerians are familiar with, then it tells more. Stories are supposed to help us ascend to a higher level of humanity. The writer and filmmaker Desmond Ovbiagele strives to achieve this by inviting us to participate in Aisha’s world—a world that is so real to many in this country. There are instances in the film that make us shudder at the absurdity of the circumstances the characters find themselves, and we cannot look away. In a chillingly horrific scene, Aisha carries the body of her dead son to her mother, who has never acknowledged her grandson because where did her daughter find the pregnancy? “Look at your grandson now,” Aisha says, standing before her mother. “Hold him. This is your last chance. Before I cover him in dust. Look at him.”

Likewise, when one of the kidnapped teenage girls is about to be offered for marriage, she says, “I’m only fifteen,” to which the cleric whispers something to one of his aides, who leaves the room and re-emerges with a child. “This girl is my daughter,” the cleric says. “She’s only five. She got married last year… so why are you not ashamed to say you’re too young to marry?”

The scene calls to mind Suheir Hammad’s poem “Break Clustered,” a meditation on war, peace and women’s rage. “Girls spoiled before ripened,” is a grave, resounding line that mirrors the reality of the girls in The Milkmaid. After the disruption at the wedding, subsequent abductions, and a brief moment of rebellion by Aisha that highlights the girls’ helplessness, their daytime becomes filled with manual labour and assault and prayers, as though they can rearrange their world through prayer. So, they pray. They pray to be reunited with their loved ones. One night, the road glimmers with mirages of hope, of escape. Aisha and some of the girls take it, leaving one behind, a crucial moment that unravels into more harm, brainwashing and resentment.

The film shows that there is no single Boko Haram story. For instance, there are girls who don’t want to go back home when help finally comes. The one left behind when others escape is later found, but there’s already a gap in the two parties’ definition of freedom.

In her New Yorker story, “The Women Rescued from Boko Haram Who Are Returning to Their Captors,” Adaobi Tricia Nwaubani writes about girls who decline opportunities to escape. This place is now home. They are the wives of reputable Boko Haram soldiers. They have a voice here. They can demand, command, lay claim to things. To them, there’s no need going back to those they once knew, to farm or dance or extract milk from cattle. No need carving new memories from the old or attempting to make something broken whole again. This forces us to re-examine our notion of home, family, and belonging.

There are other nuances on how narratives are formed and sustained. About why stories matter, about the stories we tell ourselves and pass down. Girls get brainwashed to become suicide bombers with the promise of a paradise. Those who dare not jump at the opportunity are tagged infidels. The film also shows another side of a Boko Haram soldier, who starts to grow conscience with time. Softened by affection, Haruna (Jammal Ibrahim), one of the most reliable soldiers to execute horrendous assignments, begins plotting to help Aisha and Zainab start another life.

It’s no surprise The Milkmaid was Nigeria’s official submission for the Best International Feature Film category of the 2021 Oscars. It’s no surprise that the National Film and Video Censors Board, the regulatory body for film and video content in Nigeria, prevented it from screening publicly within the country due to concerns with the depiction of religion in the film. The agency asked that some edits be made before approving it. Predominantly in Hausa language with bits of Fulfulde and Arabic, the film is a worthy selection for the category.

Ovbiagele has made a timeless film. From highlighting the devastation of our time and a place, he speaks to millions across the world who have been victims of war, political unrest and humanitarian crisis. Shot in Taraba State, The Milkmaid is Ovbiagele’s second film, an extraordinary work that earned eight nominations at the Africa Academy Movie Awards (AMAA) including best film and best director. Following the kidnapping of almost 300 schoolgirls from Chibok in 2014 and the many stories of suicide bombing, the investment banker turned filmmaker was compelled to contribute to the conversation. “The reports of suicide bombings up north kept pricking my conscience,” he says, during an interview. “Of course, being in Lagos, I was far removed from what was going on over there, but I felt obliged to at least add my voice.”

The film underscores the ways we have forgotten our collective duty to those who have suffered injustice. Displayed before the opening credit are words attributed to Yar Pullo: “I know my mother will mourn for me. But to the rest of the world, I am insignificant—wild flower, a stray gust of wind, here for a moment then gone just as suddenly, forever nameless and voiceless. I might as well never have lived.” In her poem, Hammad asks, “Whose son shall it be? Whose male child will perish a new day?” Yar Pullo could have been any of the many unnamed victims, and Ovbiagele zooms in on their lives.

With brilliant cinematography by Yinka Edward and soulful original soundtrack by Michael Ruth Ogunlade, the team employed all media formats to tell this emotive story. An ominous krr krr sound, like the creaking of a door, backdrops some scenes, as though something is about to sneak up on them—and something usually does. The sound creates a certain internal tension for the viewer. What is about to come in now to claim the characters? What manner of pain? What grief?

There’s the recurring scene of Zainab’s head bowed at her wedding before everything changed, as a pair of hands spreads the pink veil over her head, a metaphor for the non-linearity of time. There are many back and forth, comings and goings, all in an attempt to find a place death cannot come. But the more the girls run, the faster horror follows them. Sometimes, weighed down by the burden of surviving, they go after death themselves.

Before Aisha begins to tell us the story of their lives, when her friend Hauwa tries to go back to sleep, having been awoken from a nightmare, Aisha’s narrator’s voice consoles, “Yes, sleep. Dream about the way things used to be.”

But sleep does not always bring solace. Dreamlife and wakefulness are always mingling, like past and future. Returning to Hammad’s “Break Clustered,” the haunting last lines echo the reality of those who, like Aisha, are surrounded by death and uncertainty:Breathe. Do not fear what has blown up. If you must, fear the unexploded. 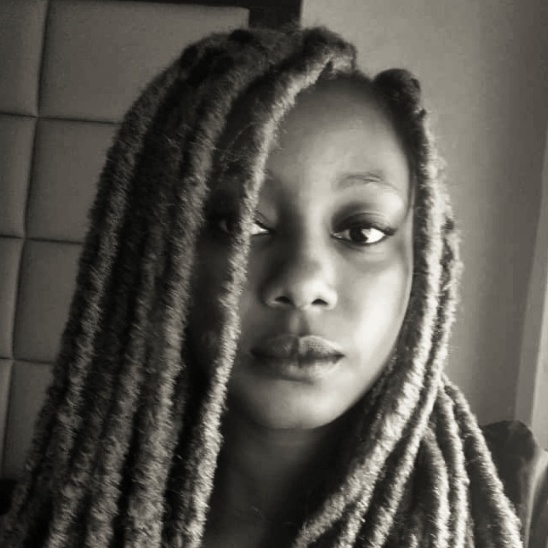 Kemi Falodun is a Nigerian writer interested in fiction, essays and literary journalism. Her work has been published in Al Jazeera, Saraba Magazine, Catapult, Africa is a Country, The Republic, and elsewhere.