Lost Futures, Or A Guide to Losing Yourself

The cameras I’ve set for the assignment face me awkwardly. To buy myself time, I take a quick drink of wine, conscious of the loopy motion of my hand to my mouth. Conscious of my dry, red eyes and the several faltering attempts I’ve made even to introduce myself. I get up swiftly and turn off the cameras.

You will develop a storytelling of personal development and healing.

Upstairs, I avoid getting into conversation; contain interaction to airy, parting statements as I move through the communal kitchen of my university housing, in and out of the bathroom, and alone into my room. I go to sleep with the awareness of my heart pulsing in my chest.

What happens when you lose the narrative with which you understand yourself? When the bridge between your selves, and across time, unforms as you cross it. When your hands grasp for rope and find air and your feet find nothing.

I wake and move myself into the new day. I cycle around my California campus feeling whole, seamless—and yet empty.  I (try to) write this. Describe in an essay to my professor why I have sent in an uninspiring, rather boring video of myself smiling uncomfortably and taking sips of red wine halfway through unfinished sentences. I don’t remember the response to the video. I do remember asking for extra time for the assignment.

“Why am I what I am?” asks a Turkish savant in Orhan Pamuk’s, White Castle. To revisit his own history is to respond. He is filled with fear at the task. He unravels in the writing. Though urgent to prove himself, all attempts are futile. He will even undermine the motivating question – “that silly title” – scrawled across the top of a blank page.

How do we know why we are what we are?

The imponderable question morphs and wraps itself around me.  The expanse of unknowing is intimidating and lonely. In Paris, on a Study Abroad program, I experience this as the pressing isolation of sitting alone at a café—even one I frequent almost everyday. It’s raining, and cold, so I’m inside at a small table where the window joins the wall. I notice that without natural sunlight, hanging bulbs give the place a tepid yellow glow. I am familiar with the flow of customers, the features of the old men with moustaches who share conversation with the old barman.

I haven’t seen a Black person here before, or even someone in their twenties, so I assume my visits do not go unnoticed. Though lacking any glamour or shared intimacy, these unromantic visits are never more than comfortingly regular. I slide my eyes away from the window to see if the barman is looking at me. He is. To cover the unintentional contact, I order a second coffee.

When he comes over to place the white porcelain on my table he adds a sentence in French. I realise too slowly that he’s said something more than “Here you go” or “Enjoy,” and miss his meaning. I think he feels sorry for me and has offered the cup for free.  I can’t be sure, but speaking feels like an acutely vulnerable act. I drink the coffee, leave exact change on the table, and make my way out. I agree with myself that I can probably never come back.

On a brighter day I visit the Jardin du Luxembourg and take in the gorgeous, shimmering green of its trees. For the aimless observer there is an absorbing continuity of movement: young and old sitting down or getting up or moving through. Speckled amongst them are excited foreigners visiting from abroad. My eyes are drawn and held by two Black women lightly ambling with expensive pushchairs carrying white babies. They use one hand to push and one hand for their phones. Sometimes they gesture.

I let my eyes become lazy and my mind wanders over the women and what their lives might be. I see hair being braided into hair and group exchanges in Wolof across the neon lit room of a salon. I imagine late-evening train rides and these women with their purses on their lap, heavy eyes closing with fatigue—and maybe boredom. I think about these women leaving the park, and manoeuvring into homes, where they’ll hand the babies into the arms of their waiting mothers. These thin white women will thank them profusely, or perfunctorily. I feel a welling of emotion that I vaguely parse as curiosity and sadness. There’s also a persistent feeling of confusion, around affiliation and belonging.

It rains the day Dana comes to visit, smudging Paris’ usual refinement. The city feels a little more ordinary, like the rest of us. I hug Dana enthusiastically, happy for the warmth of his companionship for a day. With him I feel leavened; expanded and made visible into a young woman on the metro with her friend. I realise my time here, feeling unfamiliar and unbeautiful in a city that requires both, had withdrawn me into the quiet and smallness of solitude. And in a country that refuses to acknowledge its racism—and in the absence of my own sense, and strength of character—Dana’s California whiteness is perfect. My proximity to his whiteness, his silky beach hair, innocent blue eyes, and casual unconcern, feel  safe for me.  With him I can exist, if only momentarily, in the narrative of a quirky foreign couple.

The Black-White-British-American lyrical mismatch of our togetherness is a foil to the stereotype-laden hyper-visibility I might experience as a Black woman alone, or with a Black man. I think of the policing of the primarily ethnic banlieues and the banned 1961 documentary, October in Paris. In October 1961 the police threw peacefully protesting Algerian bodies—Black bodies—into the Seine. The film was banned until 2011. Black visibility in Paris feels personally uncertain and publically dangerous. Whiteness is much easier, and I don’t feel strong. I don’t say this to Dana—or to myself—but I do feel it.

We emerge from the Metro into the grey sunlight, pay an exorbitant ticket price, and enter a beautiful, sprawling Keith Haring exhibition. Walls of the artist’s enigmatic symbols move from floor to ceiling and around corners. A near seamless expanse of strange, compelling forms swimming across surfaces. Angular figures, inked on paper, jostle in space—somehow defying disjointedness, though solid and utterly distinct.  A frenzy of dashed line strokes between and around the forms adds energy and fullness. I am amazed. This work holds everything.

I linger in a bizarre cubicle on wheels, something like a van. Haring’s hieroglyphs spread across the outside and through to the inside where Dana and I sit on a bench to watch a short documentary about the artist. I am mesmerised by Haring’s movements as he puts a marker to a subway wall or his brush to the Adonis figure of Bill T. Jones. I watch the video three times, deeply moved by the absence of hesitation. I ache to translate spirit into form as he does—to express an irrefutable existence.

Photo by Camille Brodard on Unsplash 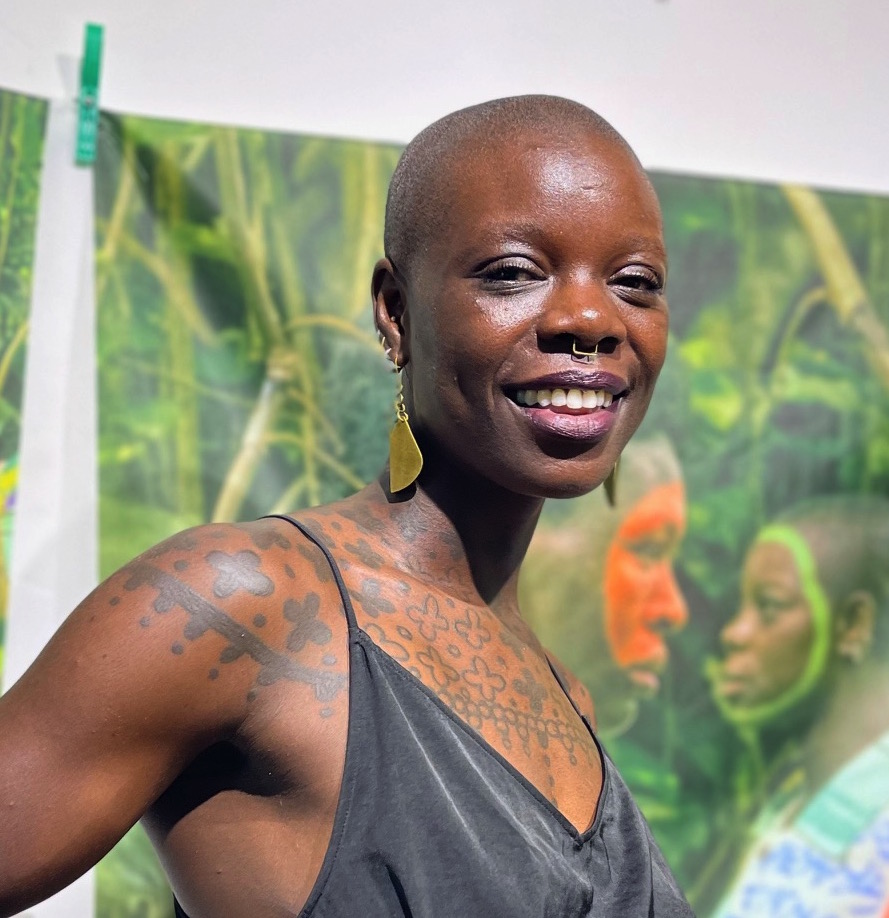 Yvette Yaa Konadu Tetteh is a British-Ghanaian creative and business owner living in Accra. Growing up across cultures and continents, she is insatiably curious about identity, identity-making, and selfhood. As winner of the inaugural Kofi Addo Writivism prize for non-fiction by African writers, her writing was published in the anthology, “Sundown and Other Stories.” Her essay “In This Body” was published in Lolwe’s fourth edition (2021).