All I Know Are Sad Songs

My sadness has me in a chokehold. I say sadness because I’m afraid to say depression. Depression is a tale that unfolds over too many pages of a book until the leaves are exhausted. Depression is a lifelong screening of darkness in which light only gets cameos. My story is still unravelling & I’m not eager to chuck it on a shelf where darkness is king. So yes, I’ll stick w/ sadness. This sadness that is leaking into my blood. Yet, I am protective of it.

Living alone far from family has its perks. For one, mother won’t poke her head into my room through my slightly opened door to see me nodding away to Hard Times by Paramore which is booming through earphones in my head. In the room I live in whose colour I am yet to identify, I own my sadness. Occasionally, someone comes visiting & I have to share. I’m not a cheerful giver but the little my visitors catch wearies them. They become restless, perhaps scared. They say my playlist is suicidal. They run.

I am building a more enduring playlist. One that can bear me through the seasons. No mushy love songs, I tell myself, because I’m afraid of where they might lead me. I start w/ Fela Kuti’s protest songs. At first, they carry me; they allow me to convert my sadness to anger. The instrumental rigmarole & ten minutes average playtime across tracks allow me settle into an emotion without having to emerge from it too soon. I listen to Who No Know Go Know, Shuffering & Shmiling, & Original Sufferheads, & try to write fiction around an uprising. I pretend I am a revolutionary. It is harder than I thought. Eventually, my sadness gets used to Fela & I have to move on to Nina Simone; her 1963 anti-racism hit titled Mississippi Goddam.

I encountered Nina Simone first on the page. In an essay by Tom Maxwell, “A History of American Protest Music: When Nina Simone Sang What Everyone Was Thinking.” Weeks after reading it, I listened to her Mississippi Goddam on repeat. This song has a very sad backstory. On June 12, 1963, Medgar Evers, a black civil rights activist was murdered. He had just returned from a civil rights meeting, parked in his driveway & stepped out of his car when a white Klansman shot him in the back. He staggered over a short distance before he collapsed & was rushed to the hospital where he died. Three months later, four black church girls would share Evers fate after Klansmen planted 19 sticks of dynamite on the threshold of God’s house.

These killings would trigger an anger which would usher Nina Simone, the High Priestess of Soul, into the civil rights struggle. Nina Simone’s 1963 anger translated into Mississippi Goddam which remains relevant in the context of 21st century #BlackLivesMatter protests. I want to do something similar w/ my sadness. To convert it to useful energy, something that will roll out from me like waves such that it will become attractive to men.

I decide to make art of this darkness.

I set out in search of a worthy art instructor. The Nike Art Gallery in my hometown pitches art as female. The single storeyed building is crammed w/ stylized portraits of women. Shadowy colours give the portraits a gloomy feel, their life is the hieroglyphics painted over the images. I contemplate a portrait & decide that its painter must be very sad. A Spanish poetry video airing on a small TV in a corner steals my attention for a few minutes. I do not understand Spanish but the video is surrealist. The station jumps from poetry to fashion, back to poetry. I think it is a sad, if interesting, station.

I tell the gallery manager, a stuttering man, that I want to learn portraiture. It takes a lot of patience to understand when he says that the painting instructors have moved away. He says they had to go because portraiture is not viable in my hometown. I try a less prominent gallery. The receptionist cannot help me. She asks me to drop my mobile number & promises to beep my phone when she has information. I know she won’t. I feel hopeless.

My father calls in the evening when I am in bed, spent from visiting galleries all day. He promises to drive me to the artists’ village at the sacred groove in the hinterland. It is not really a village. A gallery sits in the middle of a compound carved out of the ancient groove where people converge annually from around the world to worship the river goddess. It is a mud house & newly built. Behind it, a batik workshop is alive. We find an instructor here. I rejoice.

But after one afternoon w/ my new instructor, I decide that he is incompetent. He doesn’t have the profundity I seek. Profundity that will help me reach deep inside my melancholy & splatter it on several canvases in the form of paint. Or, am I just preserving my solitude? I return to the room whose colour I am yet to identify where I speculate that sadness is not as ambitious as anger.

While Ms Simone’s anger was external, registering early on as an impulse to make a zip gun & kill someone, my sadness is personal, building gently, like water boiling over a low-burning stove. The temperature will change gradually until it reaches boiling point where it will be most violent. I can’t be far from boiling point now. How long before this thing growing in my chest region suffocates me? Sadness doesn’t become obvious at once. It may not become visible until it has claimed its victim. It is very common for sad people to respond w/ an elusive ‘nothing’ when you ask them what is wrong.

From 1963’s Nina Simone, I journey to 2017’s Imagine Dragons. I pick up songs from the band’s latest LP, Evolve. To me, Believer is commiseration. When the vocalist sings: ‘I was broken from a young age/ Taking my sulking to the masses/ Writing my poems for the few/ That look to me, took to me, shook to me, feeling me/ Singing from heartache from the pain…’, it sounds like, ‘I know how you feel’. It feels good to be understood. There is hope, after all. If I can’t be a Simone, how about I be a fire-spitting dragon?

Right now, I’m in love w/ a girl who goes through Mike Poisner’s I Took a Pill in Ibiza like a spiritual experience. She repeats the hook, ‘All I know are sad songs’, w/ such cadence that it becomes more than a song about drugs. She is not just lip-synching, she morphs into Poisner’s comrade in pain. My girl doesn’t use drugs but she fantasizes about smoking occasionally. She loves big knives too.

I insist that no one has a monopoly on sadness, which could also be a communal experience, an accompaniment to some social anomaly. Think #BringBackOurGirls, the war in Mogadishu or #BlackLivesMatter. I see a picture of Tamir Rice, a 12-year-old black boy killed in the United States in 2014, my heart flutters & I withdraw further into myself. I think about my girl’s big knives now.

‘Therapy’ is my playlist of artistes such as Eminem, Lorde, Korede Bello, Lil Wayne, Runtown, Justin Bieber & Sia. The overarching theme of this collection is movement: it swings low & slow, then rises high, proceeding in the manner of a rollercoaster, forcing me out of my mind like a centrifuge. I find how my ‘Therapy’, if played on shuffle, could go from an urgent song to a lulling one comforting. Place Not Afraid after Royals, Mad Over You beside Fireflies, Cheap Thrills between How to Love & Pana, then throw Bohemian Rhapsody somewhere in the mix & you may be close to understanding.

At the heart of ‘Therapy’ is If I Die Young. I have a love-hate relationship w/ this Band Perry song. It would play in the background of my gloom for days until the moment I decide that it is some dismal tune. Sia Furler, however, is a two-way traffic. My ride-or-die, her discography contains tracks that would accompany my plunge into sadness, as well as others which would prompt me to rise out of it. It is her voice that provides the soundtrack when my mind runs wild processing everything. It is her who accompanies me into the dark street at 1AM when my mind becomes restless, when I will the walls of my room to go away.

I imagine my heart as an old Walkman, supplying my life w/ pensive soundtracks through headphones bought on a whim, a second pair of lungs. Sometimes the music stops & I fear that I’m dead. 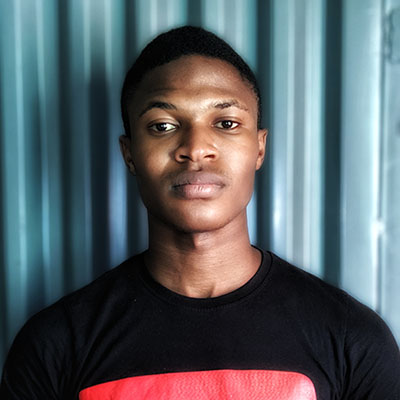 Adams Adeosun is published in Transition, Catapult, The Offing. He is an alumni of Purple Hibiscus Trust, BookArtArea and Goethe-Institut workshops.